The Villa by Rachel Hawkins 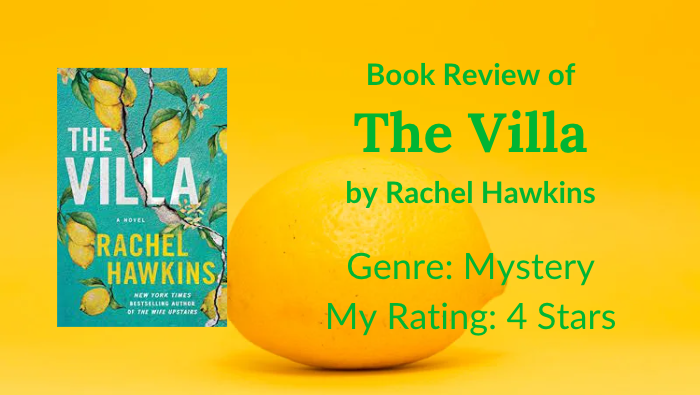 A fast and fun read with two timelines that have unexpected connections.

My History with the Author

The first book I read by Rachel Hawkins was The Wife Upstairs, which is a fun, modern, and twisty take on “Jane Eyre.” My enjoyment of that book led me to read her next book, Reckless Girls, which I also enjoyed. So it was a no-brainer that I was eager to check out The Villa. I was not disappointed. Rachel Hawkins has officially been added to my list of “must-read” authors.

One of the things I particularly like about Hawkins is that she mixes things up with each of her books and explores different plots, locales, and professions with each book. In other words, you know you’re reading a Rachel Hawkins book (especially with the lovely continuity of the covers), but you won’t know exactly what you’re going to get until you start reading.

The Villa has two alternating timelines that are interwoven throughout the book. This is an increasingly common trend in books (including in “Reckless Girls), and I think it works well for this particular story.

The modern-day timeline focuses on the “best friendship” between our narrator Emily and her childhood friend Chess. Although their friendship has been strained lately, they decide to take a vacation to Villa Aestas in Italy as a way to reconnect and work on their writing. Emily writes moderately successful cozy mysteries, while Chess is a famous “life coach” type author (think Rachel Hollis). Villa Aestas is notorious for a brutal murder that occurred there in 1974 involving a famous rock star.

The other timeline is set in the 1970s and tells the story of the events that led up to the 1974 murder at the Villa. The primary narrator for this part of the book is Mari—who wrote one of the greatest horror novels of all time during her stay at the Villa during that infamous summer. (Interspersed with Mari’s narrative is “archival” information from “books” that were written about the murder.) In addition to Mari’s book being written during her stay at the Villa, her stepsister Lara also created a best-selling album during the same stay called “Aestas.” (In the book, the album is likened to Carole King’s “Tapestry” in its style and influence.)

These two timelines begin to intersect when Emily begins researching and discovering new clues, details, and information about the 1974 murder while staying at the Villa. Her discoveries eventually lead to significant events in the modern-day timeline that change Emily and Chess’s lives forever.

Overall, I enjoyed reading this book and finished it in about two days. However, I thought the ending could have used a bit more work as it felt a bit rushed. (Also, perhaps there was pressure to have multiple twists?) Still, I think the book is a fast and fun read that would appeal to a variety of readers and Hawkins fans.

One of the main themes of the book is female empowerment and creativity—with all four of the main female characters being creative types (three writers and one musician) and how these women’s relationships with men influence their creative pursuits.

The book also explores the dark side of women’s friendships, especially when competing for the same men or in the same career space. The push and pull of the relationship between Emily and Chess rang the truest to me. Who hasn’t had a long-time friend who you sometimes don’t actually like or feel jealous of? These are difficult emotions to manage, and I think Hawkins does a good job with the dynamic between Emily and Chess.

However, I wish there had been more development of the relationship between Mari and Lara. This relationship is also critical to the book’s plot but felt less detailed. I wish I could have gotten more information on Lara’s musical pursuits because they are barely sketched in. However, this makes sense as it is told from Mari’s point of view. However, I think the book would have been richer had we gotten to spend more time in Lara’s head.

As a thriller/mystery, the plot is somewhat predictable, and I honestly think the “twist” at the very end made the book worse. I think it would have been a better book if the final twist had been removed. As I mentioned earlier, the ending felt a bit rushed and made the book weaker. I wish authors wouldn’t feel like they have to keep adding twist upon twist. Sometimes it is OK not to keep adding them in!

All that being said, I enjoyed reading The Villa and would recommend it to others. To me, this is a perfect “palate cleanser” book—one that I enjoy reading between heavier or more literary reads. With these types of books, you get to just sit back and let the author take you where she wants to go and don’t have to think too hard. Sometimes that is all I want in a book, and The Villa fits the bill nicely.

A big thank you to NetGalley for providing me with an ARC of the book.