The Ferryman by Justin Cronin 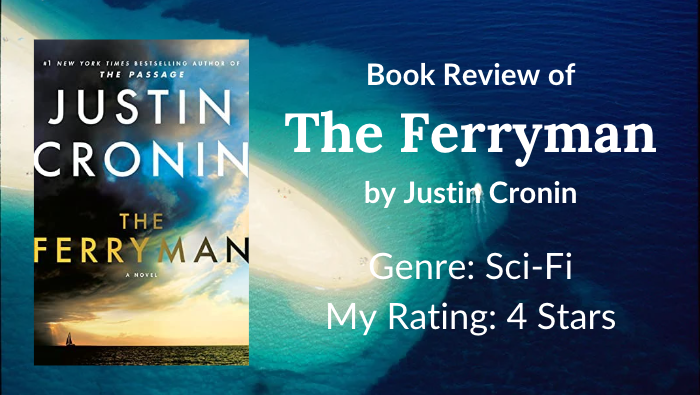 The books chronicles life on the island of Prospera—an idyllic island community where residents enjoy fulfilling and long lives until the monitors in their arm (which measure their well-being) drop below 10%. At that point, a citizen “retires.” This process involves being ferried to an island known as the Nursery. At the Nursery, memories are erased, bodies are renewed, and life starts over when citizens return to the island as “newborn” teens.

Our protagonist is Proctor Bennett, who works as a ferryman who guides retirees to the Nursery. For the most part, this process is not so bad—except when a retiree resists the process. One day, Proctor is faced with the challenge of having to retire his own father. (Actually it is not really his father but his guardian who played the role of father to him upon his arrival on Prospera.) His father is a bit resistant to the process and begins to rant and rave and says some cryptic and disturbing things on the way to the ferry. This brings up difficult emotions and memories of the time when Proctor’s guardian mother committed suicide (a scene that opens the novel).

Proctor is also experiencing other jolts to the idyllic life he has typically enjoyed on Prospera. His wife Elise seems a bit distant and unhappy with him—plus she won’t even consider adopting from the Nursery. And he also has several odd encounters with a teenage girl—a recent arrival from the Nursery.

In addition to Proctor’s personal turmoil, the “Support Staff” (i.e., the people who do the dirty work that allows Prosperans to pursue their creative and artistic pursuits) are beginning to get restless. In fact, a revolution might be forming in the Annex—the less than ideal section of the island where the Support Staff live.

OK … that wasn’t such a quick overview, was it? The truth is that this book has a LOT going on! At 560 pages, this isn’t a short book and it takes some time for Cronin to set-up and describe the world of Prospera before a lot of the action that drives the book begins to occur. However, this was a totally fine with me as I was interested in learning about Prospera and finding out what the heck was going on.

I enjoyed this book immensely! Cronin takes him time describing Prospera and how it works. From the get go, you know that something weird is going on, and everything is not quite what it seems. But what is going on? Why was this place created? Where is it located? What happened to trigger the creation of such a society? What was his father talking about when he went to the Nursery? Why did Proctor’s mother commit suicide?

Fortunately, Cronin provides all the answers in due time, and you get there at a steady pace that never felt overly forced or rushed. Everything keeps building to a certain point and then, when you think you know what is going on, the story veers in a different direction. I really enjoyed reading the book and kept turning pages to discover what was going to happen next.

All that being said, not everyone will enjoy this book, particularly if sci-fi or dystopia are not your thing. However, if these types of stories ARE your thing, this is a must read!

My thanks to NetGalley and Random House Publishing Group/Ballantine for an ARC of this book. The book is scheduled to be released on May 2, 2023.